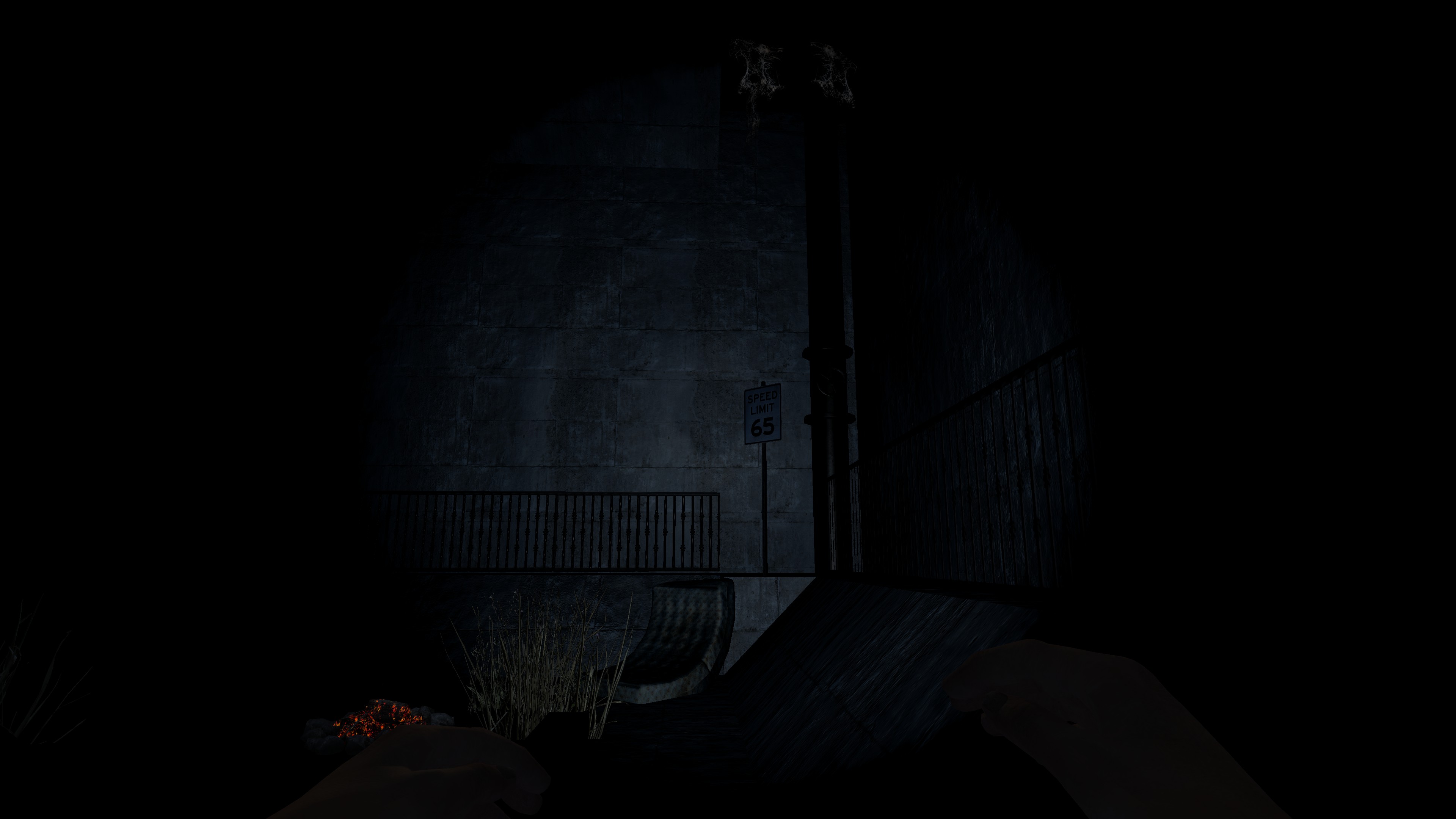 As much as I am looking forward to Alpha 13, the time spent trying things out with the map is really becoming a learning experience all on its own.  I have a bit of a soft spot for editing and playing with the cityblocks in particular at the moment.

City blocks for those who are not sure, are the set of prefabs the rwg.mixer will use to laydown the city hubs.  The vanilla prefabs had a simple single block wide pathway and were otherwise quite bland.  Community made prefabs have helped to make use of the large amounts of empty space between buildings in the cities but more needs to be done to really make better use of the area.

The pimps have left me with a lot of spare time to tinker and build, and when I say build... I really mean build!

While chatting with BigC about a concept idea of an airport or some kind of military style hub area, being comprised of four set piece cityblocks that would be extended to be seamless when spawned next to each other, basically extending the pathway that runs around the cityblock over the road so they meet up in the middle.  When the cityblocks touch like this, you will still get the regular grid style hub roads spawn as long as you have an area of seamless material (dirt destroyed stone etc), but solid cube areas will over write, so it becomes possible to remove them completely and give yourself a large area uninterrupted  space to build on. 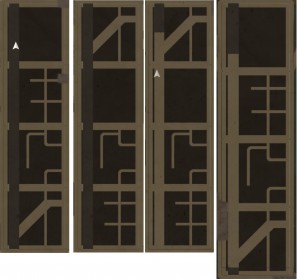 The idea in a little more detail would be to have the cityblocks designed to connect with each other no matter which sides were touching, or on the outside.  The picture above shows four cityblocks I made as a foundation to build our theoretical airport on to better explain what I meant.  You can see as long as the hub rules size is set correctly I can guarantee they will spawn in a simple line formation, the runway is designed to flow through all the blocks .  It would not matter what order the cityblock spawned in, they would always form a seamless connected hub.  If you were to litter an area like that with prefabs (hangars, control tower, carparks etc), there is no need to have the city prefabs spawn on top in the traditional way a city hub would be built and this allows you free reign to use up every block of space as you see fit.

Realising what I was doing suddenly made the ability to connect my sewer system a real possibility I threw the airport onto the burner and started working on the cityblocks for our main city hub again. 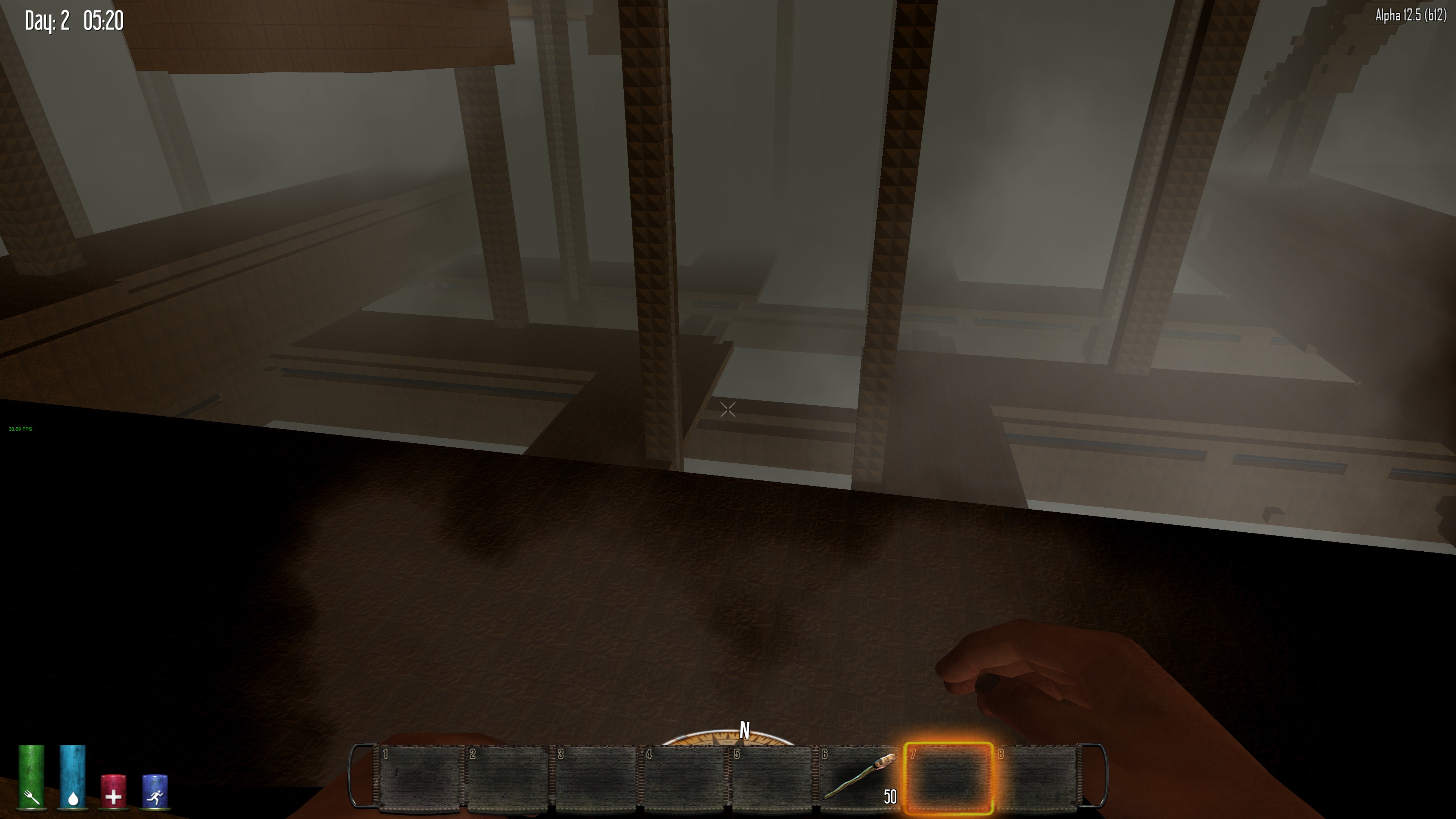 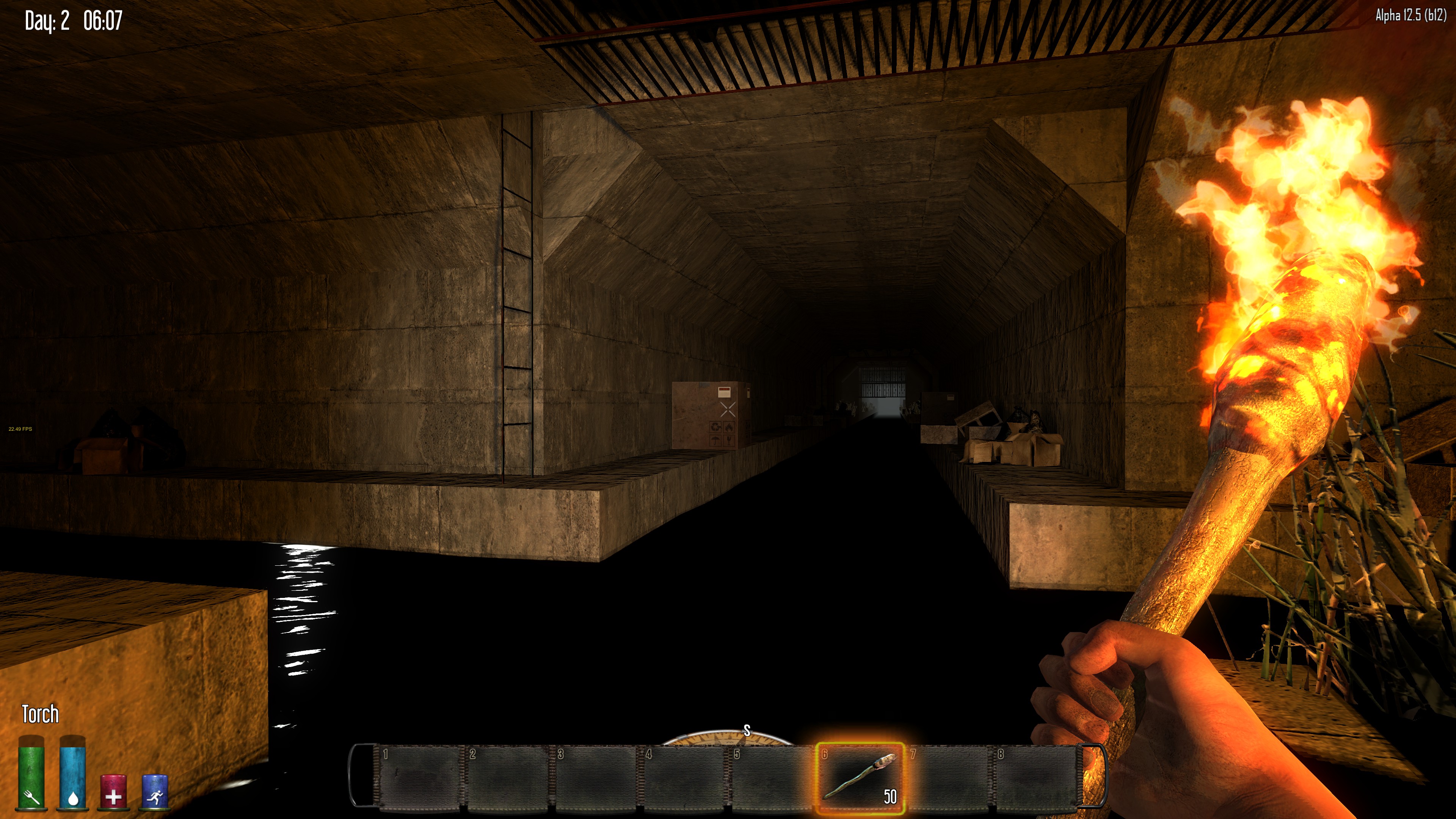 This is what I had been waiting for, I wish I had know earlier.  Our whole, single, large cityhub connected this way for me is a really big deal.  This layer of the sewer I think will tie in nicely with the new survival mechanics due, where being wet can be detrimental to your wellness/health along with being warm/cold.

Now I've been hyping up the sewers for a couple weeks now, bumping threads at every opportunity dropping a line or two about them in a lot of the blogs I've written so far.  I figure It's time to move on...  we have much bigger fish to fry and theres a lot of space the compo pack mostly leaves untouched just sitting beneath every city hub screaming out to be abused.... 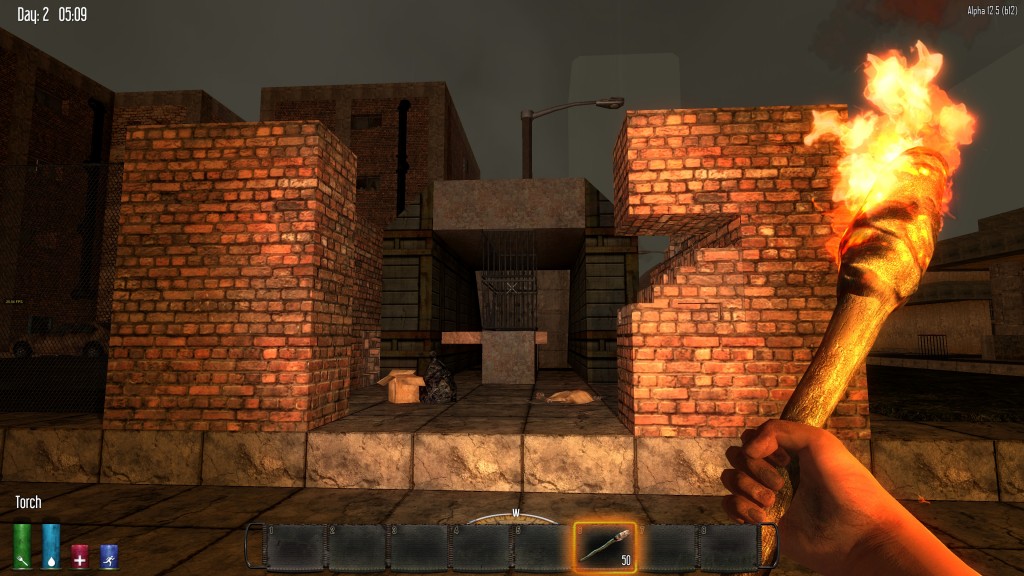 Periodically throughout the cities if you use these cityblocks you will find small subway entrances,  they have a ticket booth(honestly thats what it is...)and an idea for an escalator stolen from another more popular prefabber on the forums(the true beauty of sharing). 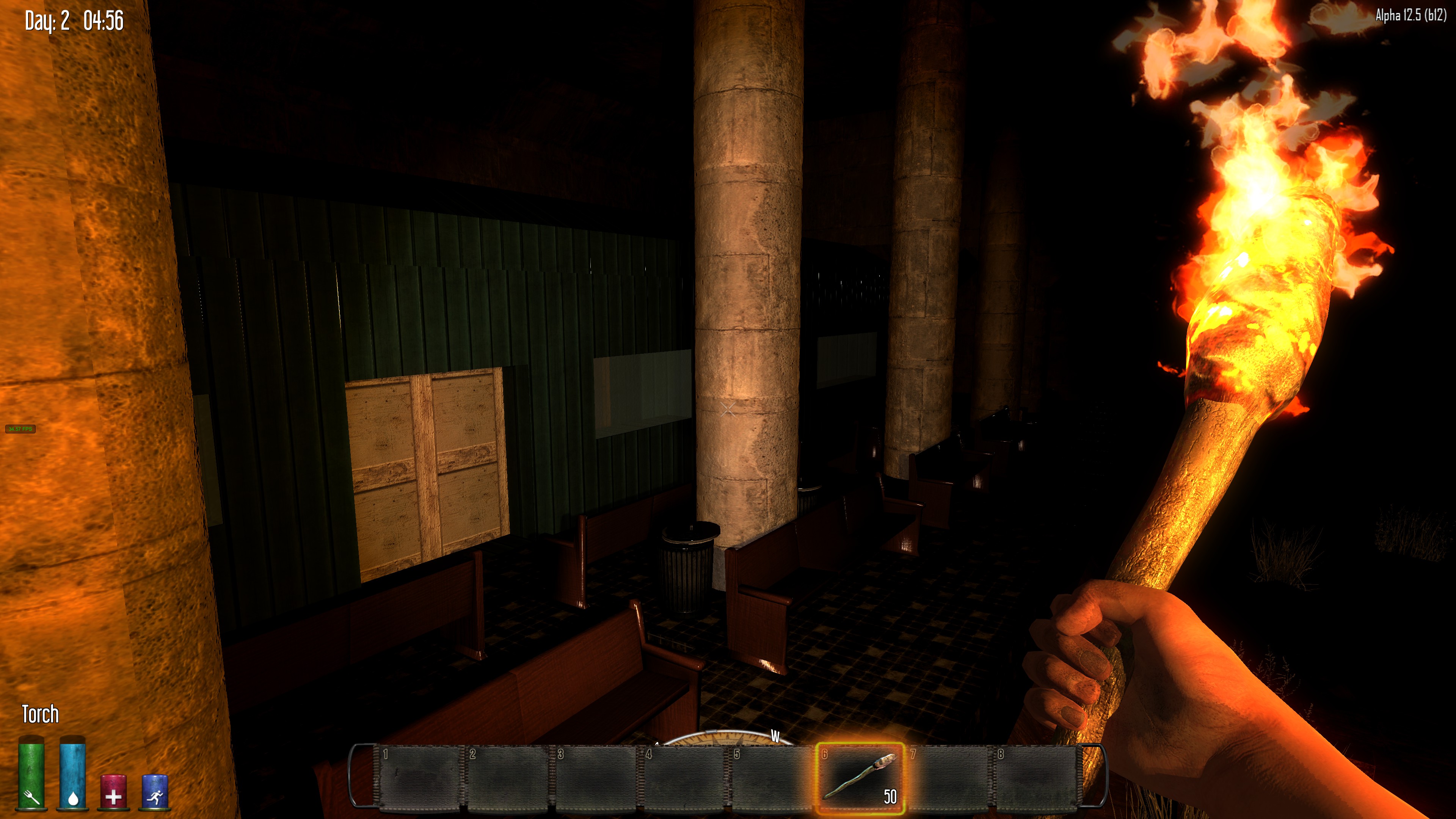 These will lead you into the first iteration of the subway system.  I took the six cityblocks I have previously designed and chopped them at surface level.  I then came up with a pattern I would use that would allow a way into and out of the subway by regular means, the stations, while still opening up the possibility of it further connecting into the upper and lower sewer systems in areas that would not be too unreasonable to expect.  So in its first form we have two basic designs for the subway tunnels themselves that connect and exit at the same points on all sides of the cityblocks.  For this to work correctly the prefab must be 117 x 117 and the road radius within the hub rule set to 7.  There may be other variables that will produce other results but in my testing the prefabs spawned onto them will appear in the same place and the city tiles themselves will begin to over lap or not connect.  For the purposes of building our city hub I still wanted the asphalt road grid so I only built on the surface level within an area of 103 x 103. 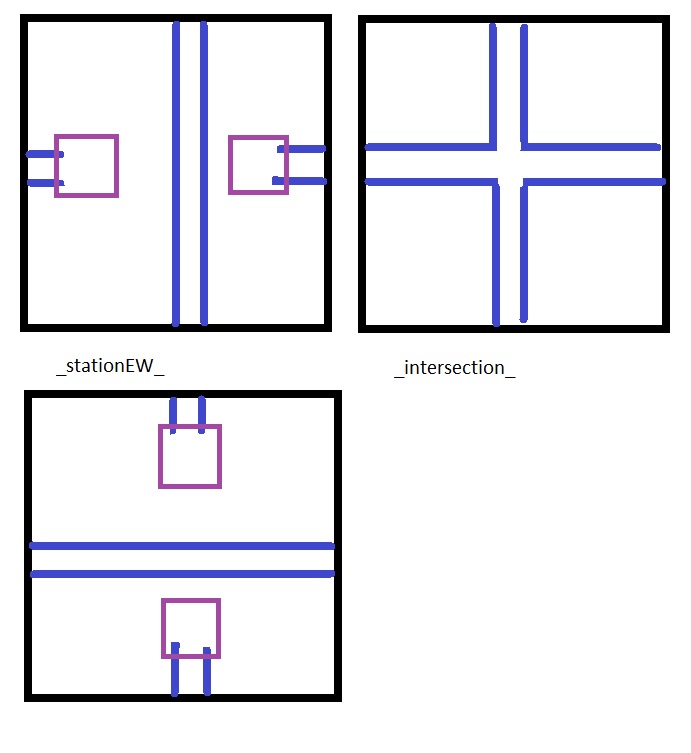 The text in the 'diagram' refers to the naming system I have created for my prefabs to help keep track of what exactly is what at a glance, this system is extremely modular and with this foundation set new cityblocks can be added in very easily if built to fit.  The blue lines represent a full tunnel with a track and space for a single subway cart to travel in, and in some cases, an actual subway cart!.  The purple 'dead ends' are eliminated with a station platform and an exit to the surface. 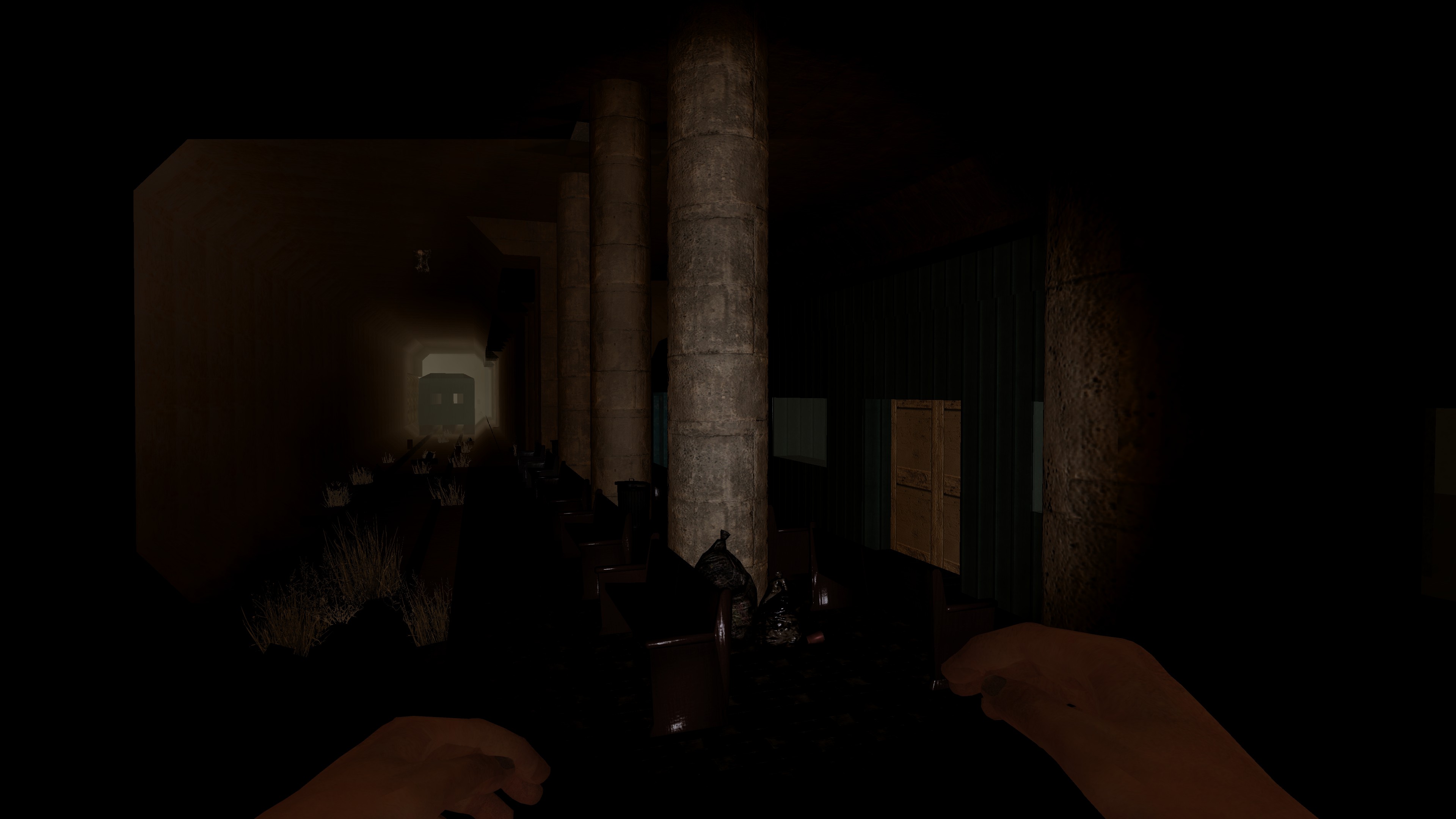 All of the previous six surface layers I'd chopped were pasted onto the top of the _intersection_ pattern, the cityblocks that had a particular feature than only ran from north to south or east to west, was copied and added on a second rotation (the _rot1_ entries on the prefab names are a reference this).  All in all there are now 11 cityblocks in their various combinations and I'm quite pleased with how they have turned out and I am sure they are going to have a big impact on the city oriented game play.

The test server is running an up to date version of our current mixer that includes all of these cityblocks and the connected sewer/subway system in all of its glory for you to come and see and give some feedback on.  Even if its just a quick peek you can see a large amount of magoli's compo pack at work with some of the best prefabs the community have made.

The bad and the Ugly.

This, without exaggerating, is a prefab of epic proportions and has not come without a few unusual bugs.  Structural integrity and the way blocks support each other and weight has been a  touch and go system at best for a while.  It provides a sense of realism but feels more like a placeholder until a more thorough rework comes in a later alpha.  I think because of this, there are areas on the city where serious amounts of tunnels now occupy space below the city and some prefabs will collapse in areas that would previously have been safe.  The parking_lot02 prefab (multi layer parking garage)  has areas on its roof,  mainly single blocks here and there that will drop.

My first excuse is we never advertised this city as pristine, and if the collapsing/inability to support blocks in some areas remains as it is, I'm happy to say that it was 'intended' and adds to the 'realistic' 'wear and tear' nature of a city left to decay.

If however during your 'testing' you come across particular prefabs or areas that are badly affected then please let us know!.

A few do not's

If you like what you see, have any feedback (or flaming)to offer, drop us a line in the comments.  Good feedback will help make a good server for Alpha 13 and we appreciate any efforts made to help us along the way.