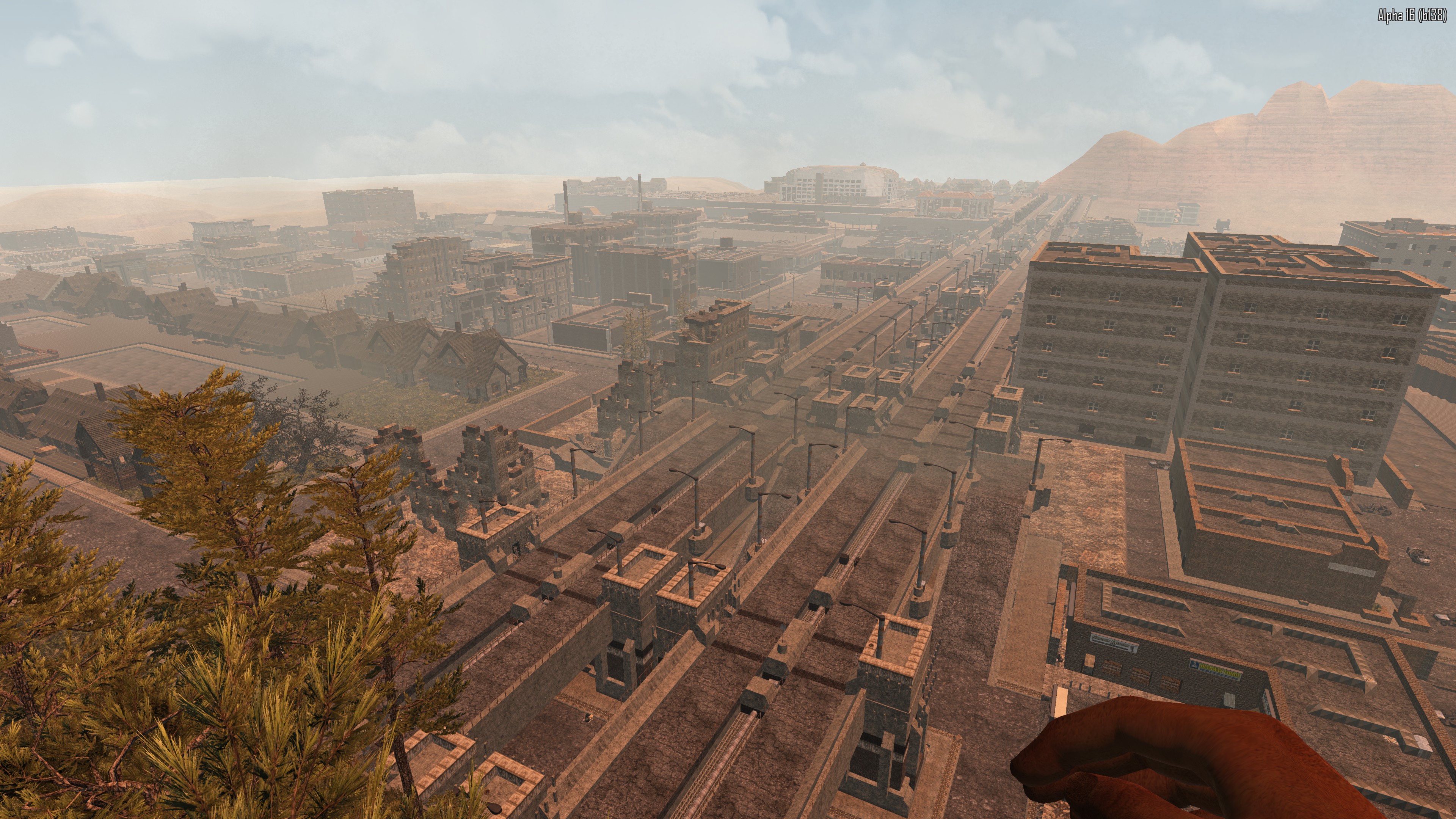 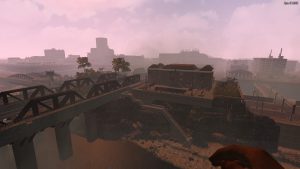 Yup, that's 10 out of 102 sections of city that have been converted, fixed, updated, painted and sleeper volumes introduced.  The amount of love you can pour into a custom built prefab in creative mode  is absolutely staggering in Alpha 16 so that's where we'll re-join the timeline of where the project is and how the vision is shaping up in The Fun Pimps latest addition to the game.

A new Alpha, new editor and a new mode

Experimental dropped about three weeks ago at the time of writing, to say we were relieved was an understatement as the Pimps have left us hanging for a while now and were quick to hand it out just as the frenzy the streamers were kicking up was at it's peak.  Behind the scenes of the players where the prefab community lurk on the forums a totally different atmosphere was building up (at least for me, but not everyone has a 50 bazillion block city to look after),  our beloved Hal 9000 delivered our saving grace, the magical and most fantastic, prefab converter... hand in hand with the grave announcement that his prefab editor was not going to be maintained and updated throughout A16.

An era was over and as someone who exclusively relied on his editor I was frantically scouring the forums for possible alternatives and the implications of having to use them.  Then it came to me,  the ray of light that wakes you up as it catches your eye in the morning, a reasonably recent thread simply named 'Prefab editor (Alpha)' in plain sight in the modding tools section of the forum.  Pille,  rising with the dawn and answer to my problems before I'd even had to contemplate dropping to my knees and beginning to recite  the Lords' prayer.

Magoli started to work on adding to the block conversion details and Hal was quick to drop some fixes to some additional changes with a new experimental build (bye bye adobe) so while I was still hitting walls with the spawning of the Hub in an actual game, I had the ability to start loading up single sections in RWG and assessing the 'damage' in the form of invisible, mis-rotated and outright borked blocks.

Then while I was still digesting the task set ahead of me and the functionality of Pilles' Prefab editor, Hal hands us a single player version of his Alpha 15 bbb commands, while also unlocking editor mode and a new 'empty' world where we can not only load up, edit and save a prefab but also run some console commands (when enabled) to simplify and create a low poly mesh of your prefab for the games new distant POI feature. 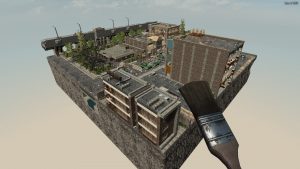 Sometimes a lick of paint is all thats needed 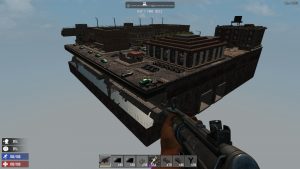 It took me just over two weeks to get it, but the very first view from one side of the city to the other in Alpha 16 was absolutely mind blowing.  It was my instant-but-soon-to-be-shattered favourite new  feature of Alpha 16, very rough and sitting oddly half inside a mountain in Navezgane and stretching out across the desert.... but it in was there at last!.  Two weeks is the longest I've waited throughout all of the Alpha conversions and it is by far the most damaging, but wow, this sight was a massive deal to me. 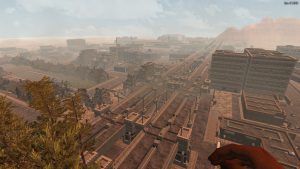 Buildings as far as the eye can see...

What's that over there?

Distant POI generation was an essential addition to the game, the chances of stumbling through the wilderness and passing by a prefab that could have made a difference  simply because you did not move close enough for it to be drawn in and visible was pretty high once you got off the roads or followed the wrong gravel trail.  Now we can spy POI's on the horizon (around 1km is the limit I believe) and make an active decision to go and investigate or not, exploration becomes a lot more fruitful and just watching that tiny blob of buildings that make up one of the new socket cities gradually increase in size until your passing between the first of the them is huge for immersion.

It's the feature I've been waiting for since forever, not only to be able to spot Slaanhatten in the distance and being able to identify it, but once your actually inside looking out towards the edges you get a real feeling of depth and the realisation of exactly how big of an area the hub takes over.  Sometimes you forget your in a custom prefab,  with some work the visual bugs that plagued areas of the hub set below ground level are long gone and it's never ever felt this good running around it.

Cruising along the highway on your minibike,  800m of concrete and tarmac laid out before you, Lowfdogs basketball arena dominating the skyline to the East, the chimney funnels of the steel factory overlapping a tiny fang of rock jutting out of the floor with an even smaller prison hiding from it to the West.  You can see Peppino's skyscraper poking out behind the hospital in the far North-East, the broken skyscraper  and it's bridging section inviting exploration visible right next to it and in general many rows of streets and unique buildings poking out all over.

It's far from perfect, the low poly mesh files used don't do a very pretty job of voxel terrain but overall the sight tick's a whole bunch of "I'm in a city" expectations which help balance it out just nicely, for the first time ever you spot the things that have been there all along, there's just no time to look at the visual bugs.  It adds a lot to the to-do list in terms of making it all look as good and immersive as possible but finally the hub has a direction towards an end, a stopping point where it looks 'finished' before works continue, probably in the form of mini areas built to completion before being stitched into the grid map. 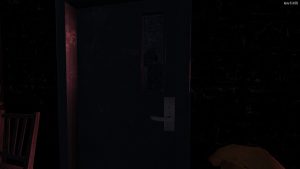 Sleepers everywhere, in every room, corridor and tunnel....

For me, without even giving the electric system a mention, the paint system a glance or forgetting the wedge I just blabbed about distant POI generation,  Sleepers are by far and most certainly no small margin the single best feature (admittedly of many) we were blessed with.  Now when people ask me about 7 Days to Die, I start with the sleepers and for the first time it's like it has it's own 'thing' instead of being the best mix in a bunch of survival games.  Every building... every single building, a horde of waiting, sleeping, preying killers.  It's a clever system of hidden spawn zones and blocks with gamestage scaling difficulty that bring a potential challenge and scare to exploring almost every building or POI you come across.

Slaanhatten became what it is today based on the simple idea, build what you want, where you want it with zero limitations (outside of the standard game parameters) and while it was and is pretty successful in that respect, filling the said city with a semi-realistic population of zombies was not just difficult but was also performance hammering and problematic for the server and the way it handles and dishes out zombies to multiple players in different locations.  I'd never hit a 'comfortable' point with zombie spawns before always falling into a stuttering performance nightmare, or barren streets and buildings with the atmosphere of too easy to loot no matter how cool or functional it's other features were. 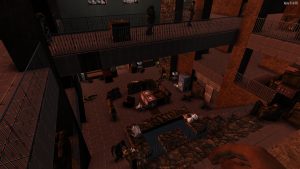 There is no easy looting in A16, you earn those crates now

The biggest worry with the first Alpha 16 release is... will it be too hard?  yup, hard as in difficult to get in and navigate to loot, hard to fight through waves of the corpses of the customers and residents who perished before you... not to be confused with too many zombies or the server dying (well we'll see...).  Every building is it's own adventure just like the socket cities,  but that alleyway between the apartments...? the park area over the road...? behind the trash bag in the sewer...? is the guy who crashed that car still lying next to it waiting to bite me?

Slaanhatten soaked up the sleeper system even better than the distant POI feature.  There are no easy entry secret routes to a prize room (well there may be a few),  there's a city filled with literally hundreds of hot spots telling tales and guarding secrets of what happened before and hopefully with gamestage enhanced spawning the challenge will increase with player progression and we'll see more interesting interactions as they gather in and around the city to break in and fight through to the excessive loot we've come to love and depend on.

Urban survival is upon us... and it will drink your tears.