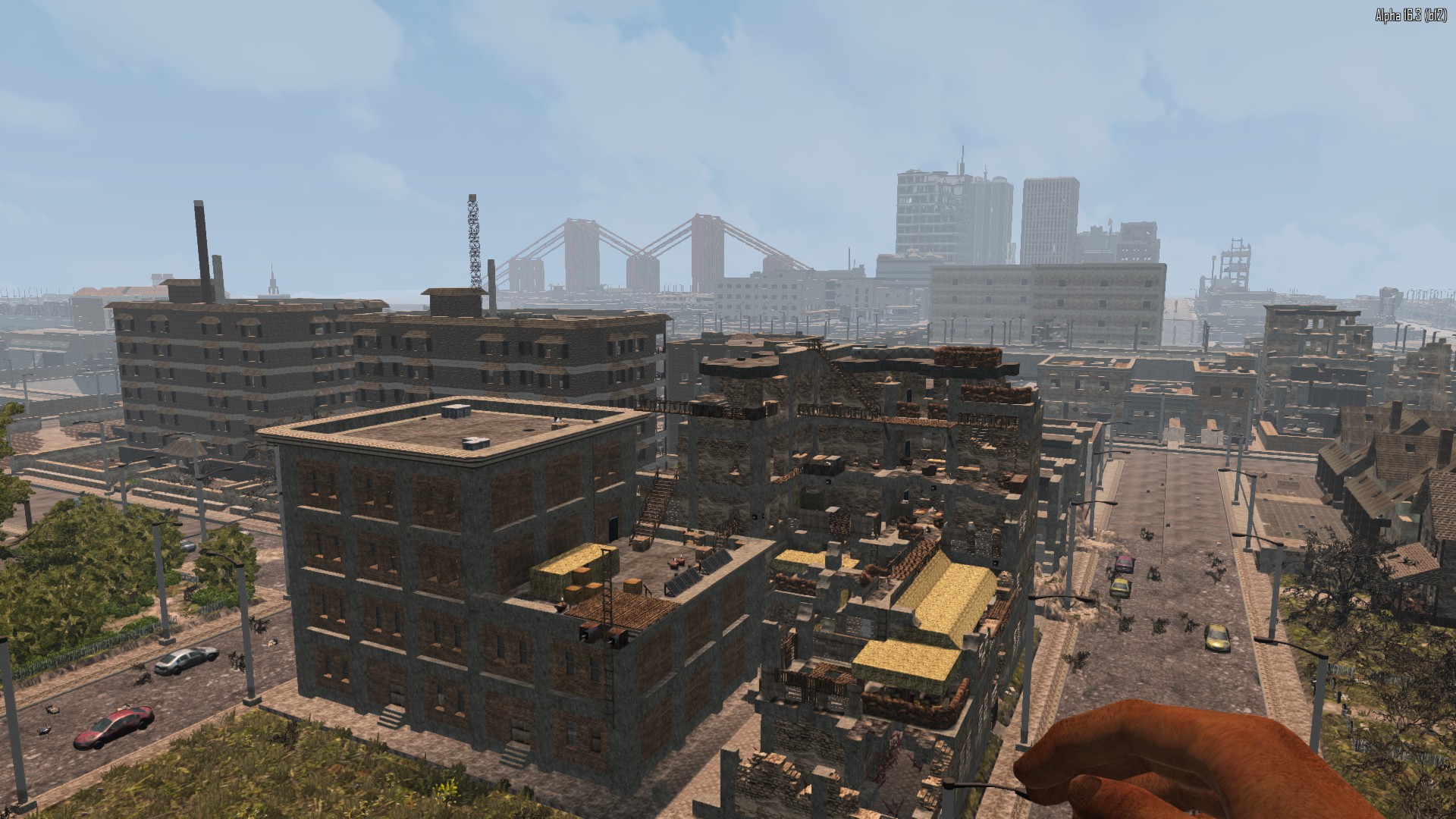 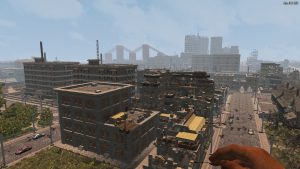 The skyline gets an upgrade

Welcome back survivors, it's been a long while since I've updated you all on the progress of the mod and even longer again since we've had the luxury of a live server to play it on, but just because things seem like they are quieting down do not be deceived... at some point over the next few weeks we will see Project Slaanhattens largest release since it was first made available to the general public back in January 2016.

The Transition to A16

I'm not gonna lie here, the damage and issues that sprouted from converting the hub over to the latest Alpha release was quite substantial and I covered in reasonable detail the steps I was taking to 're-build'.  In fact the first 150 hours I spent in A16 were literally spent loading up individual sections of the city and restoring them to their former glory, quite often enhancing them even further with some new blocks, a lick of paint and a healthy dose of sleeper volumes. 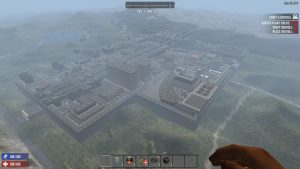 The initial sections setting the standard in A16

When the A16 experimental phase ended we were still plagued by broken custom hub code and I was a little wary that we may not get it back in working order or even worse, at all.  The 16.1, 16.2 and 16.3 patches rolled out over the coming weeks quite steadily addressing many of the issues with the game but with no word from The Fun Pimps that the custom hub issue was even on the radar things were looking increasingly bleak for the project and I begun to worry that maybe this would be the end of Slaanhatten as we know it and maybe the beginning of some kind of new way to continue with our urban survival theme.

Weighing up my options, the most obvious 'fix' would be to port the entire hub over to Navezgane where due to the different mechanics of spawning prefabs I was able to setup the city without issues.  Naturally I wanted to do this in the best way possible and considered multiple methods to do this in a way that would save as much of my current work as possible.   The sad news is that there would be no 'nice-looking' way of doing this without spending a huge amount of time building some custom prefabs specifically for this new Navezgane version, and  by 'some' I mean approximately 60 different sized and shaped terrain sections designed to blend the outer edges of the hub area with the natural looking hills, rivers and roads of the Navezgane wilderness. 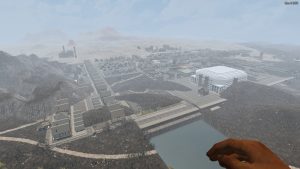 So I'm standing at the point between putting an insane amount of time into a potentially one-off Navezgane version and my Random gen original idea and asking myself if after all of this time am I really ready to do a U-turn even though the current hub code was not working?

The answer didn't take long:  Like fucking shite am I (Geordie slang-go figure) .

So I start PM'ing my favourite Pimp via the forums, asking some friends on steam and make a committed decision  that I would continue to develop the mod for Random Gen even if it means we can still only enjoy playing it during A16 in Navezgane.

The Navezgane version will be rough, but having decided that I didn't really care as it's a 'temporary' thing I begun to really assess the state of things and the best way to start tackling them.

First major issue:  Sections of the hub lower than ground level generate ugly looking glitch walls where the game fails to read the distant terrain mesh through the 'ground'.

Second major issue: Almost every single prefab/section on the south side of the hub has mis-rotated or incorrect blocks.

Third major issue: One third of the hub is covered with block fuckery (yeah that's a real word... honest!), one third is looking great and the other third does not exist other than the few roads that cross over the empty areas.

Now there are many smaller issues with the hub, but these three are what I consider to be the most important.  I needed to draw a line and mark of a point where I would have something that finally resembles 'version 1.0',  the initial idea in it's most basic form from which there would be minimal 'additions' and mainly corrections/fixes/enhancements from that stage onward. 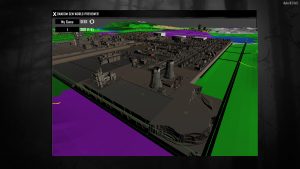 Experimenting with the idea of raising the Hub out of the ground.

So to tackle the horrid looking first issue, we raise the whole city out of the floor and generate full mesh files for the entire sections.  It meant that the two halves of the hub would now be built up on top of 'hills', albeit very blocky and ugly ones.  The benefits being when things like the sewer tunnels are above ground level you can look straight down them and see all the way to the end without them being interrupted by some odd section of land,  the river and it's contents is visible from one side of the hub to the other, the boats and crashed plane can be spotted very easily and although the low poly mesh files look a lot rougher, there is a seamless continuity that just is not available with these areas below ground level.

The second major issue had me stumped for a while,  back when it was first introduced I was rather abusive with the copy/paste style I used and struggled for a while to decide on a course of action.  My solution was quite simple,  practise a new style of adding buildings that would also save time with introducing sleeper volumes in a new area of the hub and re-approach this area with a clear plan of action at a later date and do it properly. 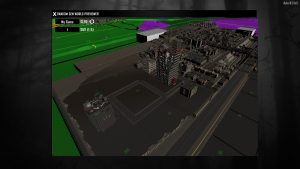 Demonstrating the 'Drop-in' technique with the Pimps own skyscrapers in the newly founded commercial district.

So this left me with the third issue, which mostly boiled down to what to do with the remaining empty sections of city.  The more permanent features I add to the cityblocks increases the amount of fixing time required with each Alpha release dramatically and by this stage I was "pretty fucking tired of just fixing stuff".  I needed a way to reduce the workload between Alphas while still adding a sufficient amount of content to keep the project healthy and interesting.  Even more annoying was the fact I pretty much built the city using mostly vanilla prefabs and with each release the Pimps would update and fix their own work and I was having to rely on third party mods/tools (god bless Hal and Pille).  So after some brainstorming and an urge to abuse the fact that they provide ready-to-use fixed prefabs each release I decided to push on with the as yet unseen commercial district of Slaanhatten, both to keep the project moving and give me some time doing some 'fun' stuff.

Now by this point I would normally have taken some time out of modding to actually play some survival in A16 with our community members and friends (and frenemies) but unforeseen circumstances meant our server was (and still is at the time of writing) offline and inaccessible.   Instead I took some time away, sparing maybe a few hours a week to keep things going and went back to the drawing board to start scratching some ideas down on how to best move forwards.

When you finally find time to crack on with some old ideas.

With the terrain and roads set out for the upcoming commercial district and being able to load up the whole hub in the world previewer for an awesomely useful 'gods-eye' perspective I started to put some more effort into tidying up the outside edges.  For the first time considering what it would look like as a single entity instead of just being a rather large collection of prefabs.  The first few sections I added were enough to send me back to MS paint to build a final A16 concept map and I found myself looking back to old idea's  and designs that just weren't worth the time or effort when I originally came up with them. 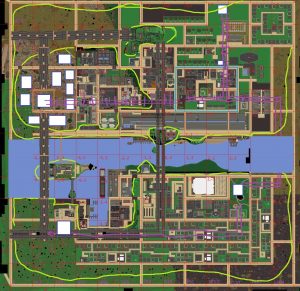 A vision of the future

I started my previous blog announcing "...that’s 10 out of 102 sections of city...",  at that point I was content with fixing what was broken but now I was starting to see the whole area taking it's own shape and even better, I wanted to see the final result however basic it would be.   The result, very quickly, was the appearance of 65 new city sections!  and better than that, there's only space for a few more then the initial area is complete.

The varying stages of completion...

Slaanhatten and complete are two words (even if one is imaginary) that I never thought I'd see in the same sentence.  It was at it's start and still is a project of epic proportions, literally millions of blocks strung together into the largest custom prefab the game has seen.  Now I should probably mention  that most of these newer sections are purely terrain/roads/ramps but adding in the buildings and sexing up an area was always the easier of the tasks set out infront of me.  For the first time ever, I can begin to explore the possibility of opening the doors to the project for more collaboration without the worry that people can 'de-rail' my dream too far from what I intended or want of it.  It does not matter where someone wanted to build something as every single inch of space now exists in one of the prefab sections that form it's back bone and are easily loaded up/modified from within the empty world or however you do your prefabbing.  No extracting, no chopping excess layers, rows and columns, just load it up, build on it and when your done save it and send it back.  The process for adding has never been simpler. 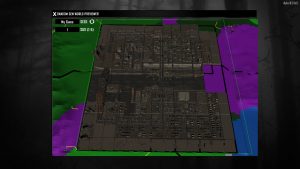 The whole city in it's current form.

Everything considered the project itself is in good shape and there's even a very dim light visible at the end of a rather long tunnel, teasing and taunting that one day I might actually finish it.

The next blog will cover in detail exactly what we have to play with in A16,  the final stages of the A16 version are almost setup and I intend to wrap it all together so we can hopefully enjoy playing in it across the Xmas break so be patient and keep your eyes peeled as it won't be long now!.